A former unused rooftop converted into a recreational urban strip 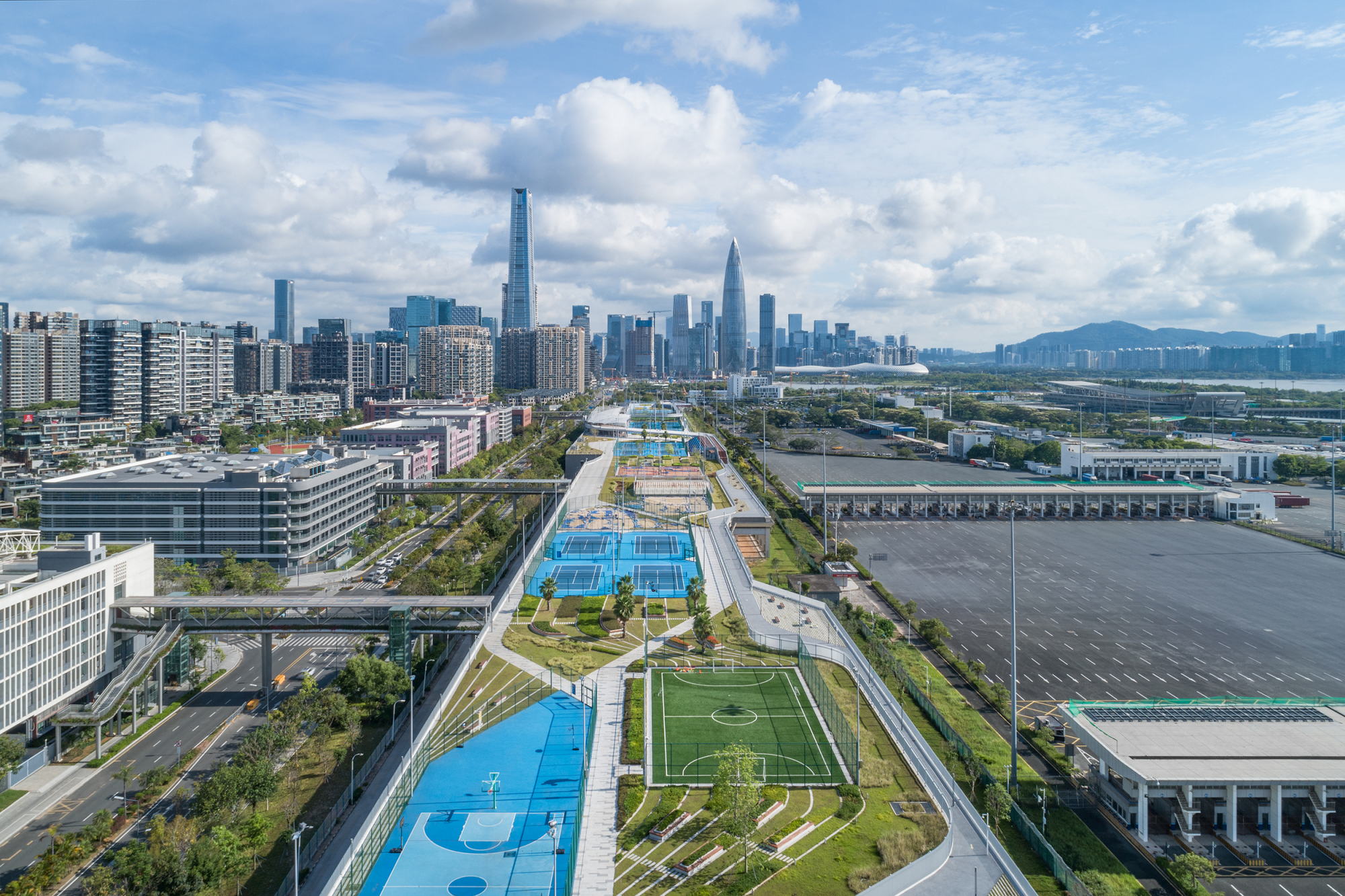 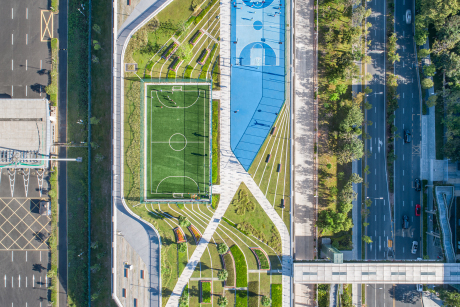 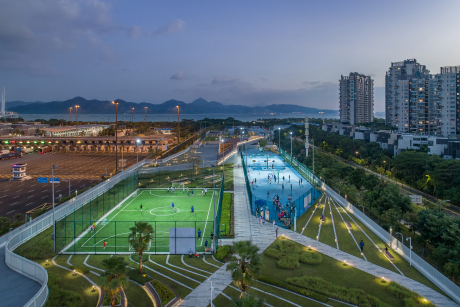 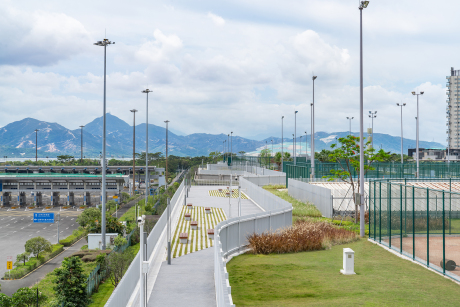 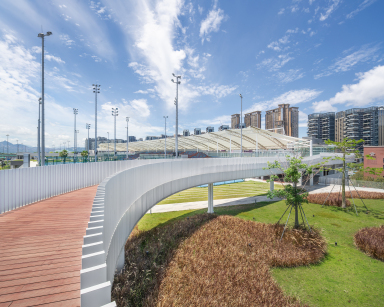 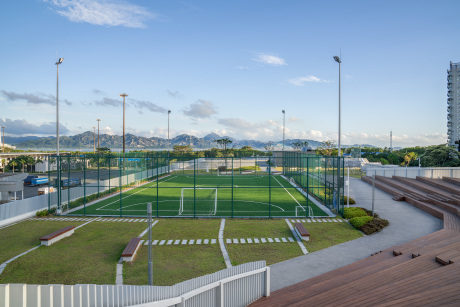 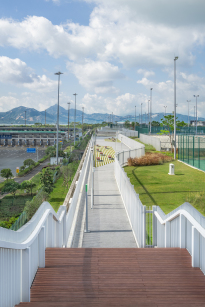 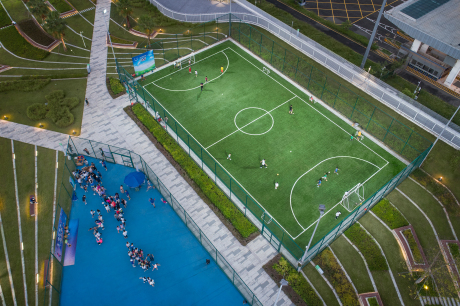 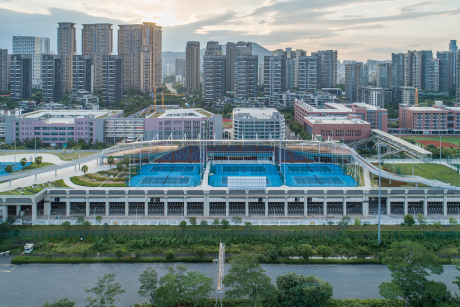 Shenzhen developed within the past 40 years, from a tiny fishing village, to one of the most innovative, modern cities in China. With a rapid population growth from just a few thousand, to around 17 million inhabitants today, it has evolved into a thriving megalopolis. More than 33% of its very young population - averaging just under 30 years old - lives in these densely populated metropolitan surroundings, hence urban parks, as well as spaces for leisure and recreation, are essential components to provide green infrastructure and to contribute to the well-being of local communities.
With Shenzhen’s year-round comfortable climate, these outdoor recreational spaces can be utilized to their greatest extent.

One of the areas the local government had foreseen to be transformed into a sports & leisure zone, was the 1.2 km long rooftop of the Southern terminal and depot building of Shenzhen's Metro Line 2, which leads to Shekou, a major crossing point to neighboring Hong Kong by ferry, bus, car or train.

The main goal of the project was to make use of the existing, yet previously unutilized rooftop area and to integrate the building better into the fabric of its surroundings, all whilst rethinking the civic function of urban design in the 21st century.
One of the challenges was to accommodate the needs of different user groups: first, to improve the quality of physical education in the surrounding schools, second, to provide places for the general public to enjoy leisurely sports, and third, to establish facilities for professional sports events and competitions with an audience.

Crossboundaries partnered with the Shenzhen Nanshan District Government, to focus on
the development of the roof surface as a refurbishing measure, upgrading the existing Shenzhen Metro line 2 Depot and furthermore, creating an elevated sports and leisure park on top of it.
The actual depot itself is primarily used for maintenance of the Metro trains (cleaning, repair, technical inspections etc.), and contains also administrative areas, such as the crew center, the signal office, equipment rooms and such.

The realized concept consists of a sequenced stretch of numerous sports facilities, combined with a park for recreation, built on an existing part of the city’s infrastructure. In line with the original intention of the architects, a public, accessible space was created, complementing a previously fragmented urban context.

In the initial analysis of the project requirements and the original site, Crossboundaries set out to address three main aspects:

I. Contextual consistency - on a Macro, Meso, Micro Level

The architects started with reviewing the overall urban context of the project (macro). Then, continued with gradually zooming in on the local circumstances of the site, examining the surrounding educational, commercial and residential facilities in relation to potential accesses and connections in between the river and the bay area (meso). Finally, on the given design site, they also reassessed the existing building of the Metro terminal including its parking (micro).

The first challenge is the 1,2 km long stretched building complex. With an overall height of about 15 m, a width of 70 m at the widest and 50 m at the narrowest point, the original complex completely cut off nearby neighborhoods from accessing the bay, neither adding any aesthetic value nor serving a specific functional purpose.

The next consideration was how to integrate the new sports and leisure zone into its surroundings, and how to connect it with residential and educational buildings located in the immediate neighborhood. This also became part of the overall investigation, though the implementation of fly-overs, bridges and corridors was not part of the initial scope nor the first construction phase.

Furthermore, the overall roof surface area of 73,000 m2 (with a total project area close to 77,000 m2) was intended to provide spatial solutions, for both open and enclosed zones, to allow for more dynamic activities (e.g., sports, competitions and their supporting facilities), as well as for more static, "quiet" ones (e.g., recreation, enjoyment of nature).

“We were confronted with very exceptional circumstances”, explains Hao Dong, co-founder and partner at Crossboundaries, “in China, infrastructure and traffic related areas usually belong to the government and are not meant to be assigned any public use at all. This elongated rooftop presented itself with huge potential to be transformed into a usable park, accessible to a wider public, enriching the urban environment around it.”

3 specific user groups were identified as beneficiaries of the new project development - the general public, local professional sports clubs (tennis and volleyball in particular), as well as 3 educational institutions: the Shenzhen Nanshan Foreign Language School and the Shenzhen Bay School, which composes of an Elementary and a Junior High program.

Crossboundaries proposed to subdivide the plot into 3 programmatic zones for the 3 different user groups, all of which tightly link with their immediate surroundings: one for the general public, for social & cultural interaction; one for use of the adjacent schools only, fulfilling educational functions; finally, one for professional sports, for training activities and hosting of competitions with audience.

Special emphasis was put on the fact that all 3 user scenarios can take place in parallel. The dedicated areas need to allow being closed off for a limited audience or opened up to a wider one at certain times.

Each of the programmatic areas was developed with a varied and balanced mix of sports, leisure, support & service (changing rooms, coach and referee areas), as well as green functions, resulting in an overall integrated sports- and playscape.

The segmentation of the long-stretched sports park was influenced by the adjacent educational institutions. Ultimately, the architects divided the rooftop stretch into 5 segments: the northernmost part is dedicated to the Shenzhen Nanshan Foreign Language School, followed by the Professional Sports Competition and Training zone, then the facilities for Shenzhen Bay School’s North Campus and South Campus, ending with an area dedicated to the general public for leisure, fitness and greenery. In a functional sense, the strip satisfies needs of multiple user groups for sport and leisure facilitation, becoming a linear recreation hub serving the neighborhood.

In total, for all the schools, 5 tennis and 6 basketball courts, as well as 2 Five-a-side fields, were placed. Included are also several running tracks (460m, 160m and a 200m straight one). The competition and training area for professionals was equipped with 2 lawn
courts, 6 competitive tennis courts, 4 training and 2 clay courts, and 2 volleyball courts. The community segment features green areas as well as a full-size soccer field.

All entrances and accesses, to the rooftop park, are located in direct vicinity to different functional areas, whilst preventing unnecessary interference, reachable via 6 access points in total.
Vertical connections make the North and the South end directly accessible from the ground floor, inviting the general public up to the roof.
School access happens exclusively via crossovers, leading directly onto the rooftop. They are attached to 3 secondary public entrances, in the form of elevators and staircases, for additional access from the street level.

On the rooftop itself, circulation is facilitated by three main paths that occasionally intersect, connect and “grow” into other functions: Leisure path, Pedestrian path and Sports path (running/skating). The paths are also distinguished by material. Most of the pedestrian walkway is made of stone pavement, while the leisure trail is mostly covered with timber and the sports track with a rubber surface.

Providing Orientation on a human scale

The development of a wayfinding and signage system along a very long strip, like in the case of the Shenzhen Bay project, has to facilitate navigation and overcome the seemingly repetitive character of an extremely linear site.

Applying the results of the previous analysis, Crossboundaries designed a signage system applied on the macro, meso and micro scale.

Macro scale signage is assigned to the entrances, highlighting them and ensuring they are visible from the ground floor and from afar.

Meso scale signs are deployed along the strip and helping users to locate themselves (and each other) on the long, linear platform. Signage pylons are placed in 100m increments along the strip, indicating the facilities that are located in that very stretch and giving an idea of one’s position relative to the North and the South entrance. The top parts of the pylons have numbers – 100, 200, 300, etc. - marking the distance one has walked.

Finally, micro scale signs identify specific destinations within those 100m marks. They define meeting points, whilst at the same time serving as functional objects, in the form of benches, light cubes, garbage cans, and the like.

As the sports strip is an attractive addition to the urban neighborhood, offering a variety of recreational options, it attracts users of all profiles and ages, ensuring that the area is used throughout the day by a diverse audience.
The strip also adds the visual experience from the Skypark itself, from which the surrounding urban landscapes, the Shenzhen skyline and the Bay area, can be enjoyed.
The inhabitants of the nearby residential compounds also benefit from beautiful views towards the East, looking over Crossboundaries’ design of the roof park.

Crossboundaries’ concept brings educational institutions together with the local community in a unique combination of sports and recreational offers, tied together with the landscape. Additionally, it makes use of utilizing the local panorama, capturing vistas towards the sea, presenting an ever-changing experience.
The partially elevated recreational trail not only integrates the supporting facilities, but also provides an excellent place to view competitions, training sessions and to enjoy the views of the Shenzhen Bay.

IV. Humanization & Diversification
Crossboundaries’ design language distinguishes itself once more through the integration of predominantly human aspects. All of this becomes visible, not only in the overall functional layout connecting communities and facilitating different usage scenarios, but also through the choice of materials and the application of environmental, sustainable principles. The project uses lots of wood, including all the tribunes in the stadium, lots of green areas, the use of light, permeable architectural structures, not only for buildings but also bridges, and rails. The greenery planted along the pathways both, provides shade and contributes to efficient drainage and microclimate conditions.

Crossboundaries' solution is a green accent in its surroundings which aims to enable a healthy urban lifestyle that goes hand-in-hand with the city’s youthful, entrepreneurial and dynamic character. The roof park development has become an attractive addition to the urban neighborhood, interwoven in its infrastructure and seen as a community jewel that many of the surrounding high-rise buildings have a direct view on.

“Our linear park is like a missing puzzle that plugs into the neighboring communities,” concludes Binke Lenhardt, the other co-founder of Crossboundaries. “It creates the necessary physical and visual link between the urban tissue and the seaside, and - along the way - aims to satisfy the schools’ and the public’s ever growing need for recreational spaces and room to breathe in a dense, urban environment.”

Tasked to develop such a large scaled sports and recreational park rooftop, Crossboundaries created an essential meeting point in Shenzhen that enhances social and cultural interaction between different groups of Shenzhen’s diverse urban population. The project succeeds in fulfilling its educational mandate and advocates for sports and wellness in general, in a densely populated urban space. 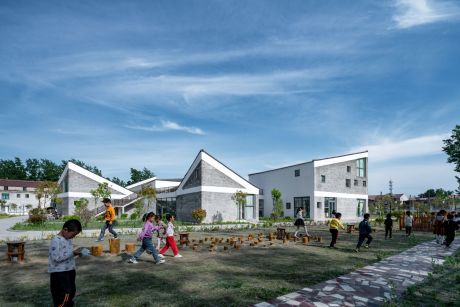 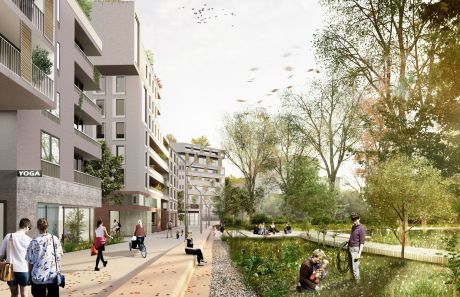 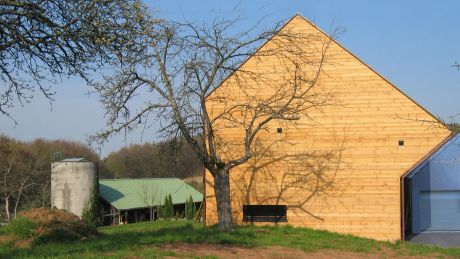 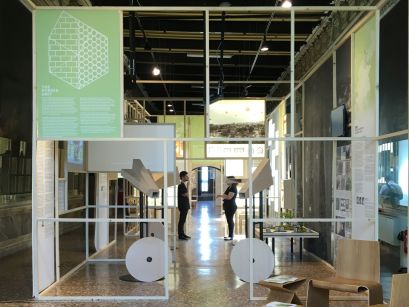